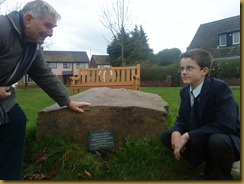 As a boy I lived in Cardigan, a small town in South Wales. From my house I looked up to the Preseli hills where the rock used to build Stonehenge came from, which is over 400km . One of the mysteries is how the huge rocks were carried from Wales in such ancient times. Did they go over land or sea?
Stonehenge was a site for pagan sacrifice and its beauty might mask a horrible past, if it was people who were sacrificed. We can only guess why the massive stone circles at Stonehenge were put there. Some believe Stonehenge was an enormous solar calendar and a temple to worship the sun. We cannot know.
One idea is that henges were places of gathering and trade. Rocks placed in high places marked ways for people to travel. Many of these high places were chosen later by Christians for church buildings. These church buildings were named for Michael, an angel named in the Bible. Many of the henges were destroyed to build the church buildings. There is some evidence that this is the case in Takeley which sits within a neolithic clearing with an easterly lane leading to it.
Stonehenge lies in a line of henges starting at St Michael's Mount in Cornwall. St Michael's mount is on the western tip of Britain and the site of a very ancient port, trading tin. Our ancient journey through Stonehenge, marked by church buildings, ends near Lowestoft. Lowestoft is the most easterly point in Britain and the site of another ancient trading port. Is this another clue as to why the henges were built? Could they have marked the way between trading centres?
The line of henges that Stonehenge is a part of, also passes through the Wandlebury Rings near Cambridge in the Gog Magog Hills. The Gog Magog Hills are named after pagan giant gods, not the peoples in the Bible.They were believed to be the pagan gods protecting London and they are carried as images each year in the Lord Mayor's show! Britain's pagan history can only be guessed at from giant rocks of Stonehenge but it is never far from the surface in the names and folklore of our country.
On the village green in Takeley, opposite the Four Ashes Pub, lies a large sandstone boulder with an ancient mysterious history and a more recent story. It is a type of rock known as a sarsen. Sarsens are large, tough sandstone rocks. It is about 1m by 1m, roughly square with a smooth top and its edges are rough.
The Takeley sarsen was found during the building of Stansted Airport in 1985. It was found buried in a pit on the site of a Bronze Age village (about 2000BC).The pit was to one side of the remains of the door of a very large community roundhouse.
For centuries sarsens have been used as way markers and as standing stones as in Stonehenge. Why would the villagers bury a rock in the middle of their village? We don't know. It needed a lot of effort to dig the pit and put the boulder in it! Was it put there for a practical reason or as part of a religious ceremony?
We might never know but, since 2003, the Takeley sarsen reminds the village of its ancient past.
Joshua, a pupil at The Christian School (Takeley) interviewed the local historian Trevor Allen who shared some interesting facts about the stone.
Trevor remembered that there were three digs between 1985 and 1993. In one of these the Iron Age village was found near the airport catering site. The sarsen stone was used in the Bronze Age and the Bronze Age people must have thought that it meant something religious Trevor thinks.
On the side of the sarsen stone are two holes which when the stone was found they thought were bored by men, but they have clay in them, so they could be there because of roots growing into the stone.
They did not just find a sarsen stone but they have found pottery and Trevor described the wonder of holding ancient pots held by people thousands of years ago.
When Trevor first saw the stone he described it as like finding a precious coin in the street but ten times more exciting. He wants people who see the stone to remember that people have been in Takeley for thousands of years.
Posted by MEH

From the Minutes of Takeley Parish Council

Communicating with the Community
(previously circulated)
Clr Nick Free introduced the concept of ‘Takeley forum’.
Goal
A web based forum this will create an improved communication and publicity capability for the Parish of Takeley and the surrounding areas, to help understand local issues and to promote news and events within the area.
Purpose
Provide Takeley with an information source and interactive two way forum for local groups, clubs and potentially local small firms to share news on their activities, events, thoughts and ideas as well as providing a forum for local people to highlight issues and feedback on policy in a way that will support the creation, development and on-going review of the Parish Plan. The forum should provide an immediacy of communication and feedback that supplements the cycles of printed media (newsletters, grapevine etc.).
Sits alongside the council web site www.takeleypc.co.uk and has links to and from the existing site. Existing site remains the home (and document repository) for TPC and www.takeleyforum.com becomes the interactive, wider local area forum.
Management
Core management group will act as site administrator to publish and manage content on-going to keep the site updated, fresh and apply the appropriate moderation according to rules.
Cost
Estimated costs, excluding VAT.

TPC thanked Clr Free and agreed that this is an important element to increasing community cohesion, and developing an opportunity that enables the community to fully participate in the spectrum of local issues. The Council resolved to sponsor this initiative and to provide £2500 from the ‘Community Projects’ fund towards start up costs. TPC agreed that the Clerk should work with Clr Free and his wife to explore the best IT solution which will then be presented to the Parish Council for ratification.

Communicating with the Community - ‘Takeley Forum’
Clr Nick Free reported progress of ‘Takeley forum’:
-Deposit paid
- met with development company to detail requirements.
-Drafts and templates will be shared with TPC members
-Clerk & Clr Free will submit a summary of comments to development company
-Next payment upon completion
-Target is to launch in December.

Takeley Forum
Clr Nick Free reported:
§ Website build will be completed w/e 16/12/11
§ Final payment will be required on completion.
§ Clr Nick Free demonstrated various pages from the website. TPC members agreed that the website would be an excellent source of information and provide a useful communication tool for the community. It appears very clean and easy to access.
§ Data will be uploaded and ready to go live.
§ The site will be promoted in the February/March Newsletter.
§ TPC agreed that local business will be charged £20 per annum per advert.
§ Business advertisers will be encouraged to promote ‘Takeley Forum’ on their hard copy advertising (viral)
§ Revenue from advertising will be held by TPC and will fund competition prizes.
§ All other adverts/content will be free of charge

Takeley Forum
The website build is now complete and final payment is required.
TPC authorised the 2nd & final payment of £1461.58 (inc vat)
The site will be launched in the February/March Newsletter.

Members were reminded that they should declare relevant interests at each meeting for items on the agenda and to request a ‘Change Form’ if their circumstances have changed and their register needs amending.

Posted by MEH No comments:

Eight days into the hosepipe ban 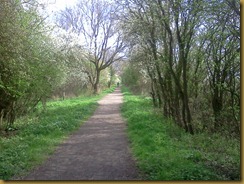 One of the pleasures of living in Takeley is that to the South of the village runs the old Flitch Railway track and if you head west along it, within half an hour you are  on the edge of Hatfield Forest. And within 15 minutes if you are good at navigating you are at the Shell House for a coffee and a visit to the toilet.
I’ve always wondered if we should reciprocate in Takeley. Imagine the attractions of walking to Takeley Station from the Shell House, having a morning coffee, then returning to the Shell House for lunch.
Any way it seems to have rained everyday since the hose pipe ban.
Posted by MEH No comments:

Well Resurrection Sunday has passed again and once again we are confined to our front rooms as the rain falls. We are in a drought and so should be grateful.
This afternoon I walked out to Little Canfield Church. I wanted to check the progress of the blue bells at Runnell Hey. And was not disappointed. They are in their first flush promising the usual burst of colour. 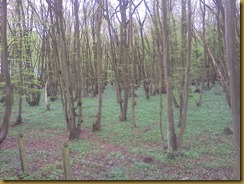 On the walk it was good to see the path-side plants. They may be common but in their spring showing their shining beauty is welcome. 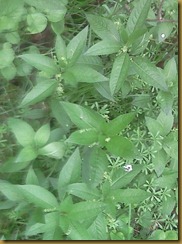 Dogs Mercury is the signature plant of our woodlands. It is so common. If you happen to smell it it is fetid. Young dogs some times find the smell irresistible and  are severely affected by it. It is poisonous and so they end up vomiting. Their attraction for it is not why it is called Dogs Mercury. The Dog bit refers to its uselessness as a food compared to its close cousins. Dog here means useless. 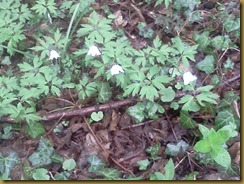 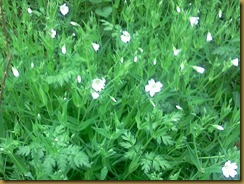 Stitchwort has a beautiful flower and looks special at this time of the year as does the Wood Anemone.

Some simple plants to look out  for. I don’t know if being able to name them increases the enjoyment of them and by the way; stitchwort is supposed to have the medicinal property that it cures stitches. Might be useful for the cyclists and runners who passed me today.
Posted by MEH No comments: